My husband’s to-do list for his day off included a mani/pedi and shaving his legs. This may shock many of you, but let me explain.

He is currently in the new Broadway play, CASA VALENTINA, in the title role. It’s Harvey Fierstein’s new play, based on a real resort up in the Catskills that existed in the early 60’s called Casa Susanna, which offered a respite for heterosexual cross dressers. In those days it was illegal in some states to cross-dress. This resort was created as a place where these men could relax and be themselves, dressing as women, freely and safely.

At first I wondered how I’d feel seeing my husband exhibit commonly known feminine attributes for the role. But I’ve gotta say, it’s all working out pretty great for me. Do you ever find yourself wishing your significant other could understand you better? Well, I’ve got that in spades now!

One day he decided to examine what it would feel like to cross-dress in public, to actually go outside dressed as a woman, the same as a man who cross-dresses in real life would do. So, during rehearsal, instead of changing out of his female clothes and makeup and heels, he hit the streets for his lunch break “as is.” He discovered some really deep things about himself and the lifestyle as the cashier clerk in the deli didn’t look him in the eye and the people on the street darted uncomfortable glares in his direction.

He told me that though he didn’t feel like a beautiful woman because he sensed that people could still tell he was a man, he related to what it must be like for a woman on the street protecting herself from unwanted attention and cat calls. Even though he was obviously a man, he felt the need to stare straight forward, keep tunnel vision, and avert any unwanted stares. I’ve often told him of times when construction men whistle or feel entitled to even whisper nasty things in my ear as I pass. As a cross-dresser, he suddenly viscerally felt how uncomfortable that would be for me. 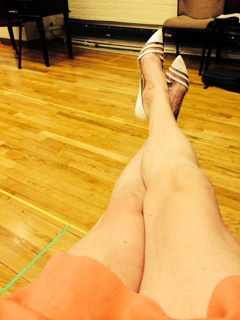 On a lighter note, he discovered some challenges that come from the literal experience of wearing girl attire, like how hard it is to walk in heels. He said, “It’s one thing to wear them on the flat, wooden floor of the rehearsal studio. It’s an entirely different thing to wear them in the hustle and bustle of Manhattan! People were all whizzing past me so quickly. I was just trying to stay out of their way! Darling, I’m really learning that when we’re walking together I need to slow down for you!”

Can you imagine my glee? Inside, I let out a fist-pumping, YESSS!

And how eye-opening it was when he texted me an image of him in his real costume during his initial fitting. I texted that the dress was beautiful. He wrote back, “I look fat.” If that’s not relating to how women feel everyday, then I don’t know what is!

I was impressed when he got his first manicure. He had met a cross-dresser who said how his hands are one the most important aspects of his feminine appearance because it is something he can literally see without being in a mirror. Lipstick he can’t see. Eyeshadow he can’t see. A wig he can’t see. But his hands are always right in front of him. Because Patrick’s character in the play is a court stenographer whose fingers are quite literally in front of him all day, Patrick thought getting a female manicure would lend powerful insight into his own experience as Valentina.

So to the nail salon he went. He got a French manicure. Snap.

I asked him if he found himself behaving more delicately with his beautiful nails. Like for instance, did he find himself protecting his hands at the sink so as to not ruin the manicure? He admitted yes. I said, “See? That’s why I get so frustrated when you leave food gunk in the sink instead of making sure it all gets rinsed away. I don’t like having to chip away at the dried-on or caked-on gook because I don’t like messing up my nails.” He said he understood. He really, REALLY understood!

I’ve always been deeply moved and impressed by the amount of research Patrick brings to every role he plays, but this time I am deeply grateful for it. What a gift to have him understand what it’s like to walk in my shoes – LITERALLY!

Casa Valentina is currently running at the Samuel J Friedman Theatre in NYC.