In order to put this blog into context, I need you to watch this video.

It is a commercial produced for Free People clothing. It features a dancer wearing clothes from the company’s line. The girl in the commercial is obviously beautiful. If she is the same girl reading the copy, she handles it with a genuine sweetness. I love what she says about dance, as it is truly lovely. But I use the term “dancer” quite loosely because, unfortunately, the model in this commercial cannot dance. Her technique is abysmal.

It came to my attention because of an article talking about how dancers are in an uproar regarding this Free People commercial. They are appalled that Free People would pass this woman off as a dancer. One of the most interesting parts of the article points out that we’d be hard pressed, indeed, to imagine a Nike ad with an athlete missing every hurdle or a Gatorade ad where the kicker misses every field goal. It would be bizarre.

Why do we respect those athletes more than dancers or other artists for that matter? We assume there is a great deal of training that goes into being an athlete. We instinctively know the long hours of practice and drills these athletes must go through to be the best in their craft. We see absolutely nothing wrong with paying ballplayers millions of dollars, but dancers train as much, if not significantly more, and receive no societal adoration or compensation.

And to see this ad just strikes that nerve. Did it occur to Free People to put out a casting search for true, professionally trained, stellar dancers who could also read copy and model for a shoot? Maybe they did, but I doubt it. My guess is they hired a model who said she had dance training. And my bet is the execs couldn’t even tell the difference.

I can think of another example that’s a little similar, but doesn’t involve dancers. My husband rails about this all the time . . . People who normally do contemporary work in film or television or even on stage then getting cast in major Shakespeare roles on Broadway.

My husband has studied Shakespeare since he was two. Yes, two years old. For real. And he still doesn’t think he’s even begun to crack the surface of the depths lying in that material. When done correctly, it is actually quite easy to understand. But when done without the finesse, the knowledge, or the training, it’s as boring as everyone thinks it is. And it’s grating to his ear when he has to witness the insufficient attempt.

He likens it to a pop star or a country star being invited to headline for The Metropolitan Opera. It wouldn’t happen. Everyone knows you need classical training to accomplish the task. My husband loves Paul Simon, but he doesn’t want to hear him sing Rigoletto.

And there are other examples out there. Look at this ad for Tampax: 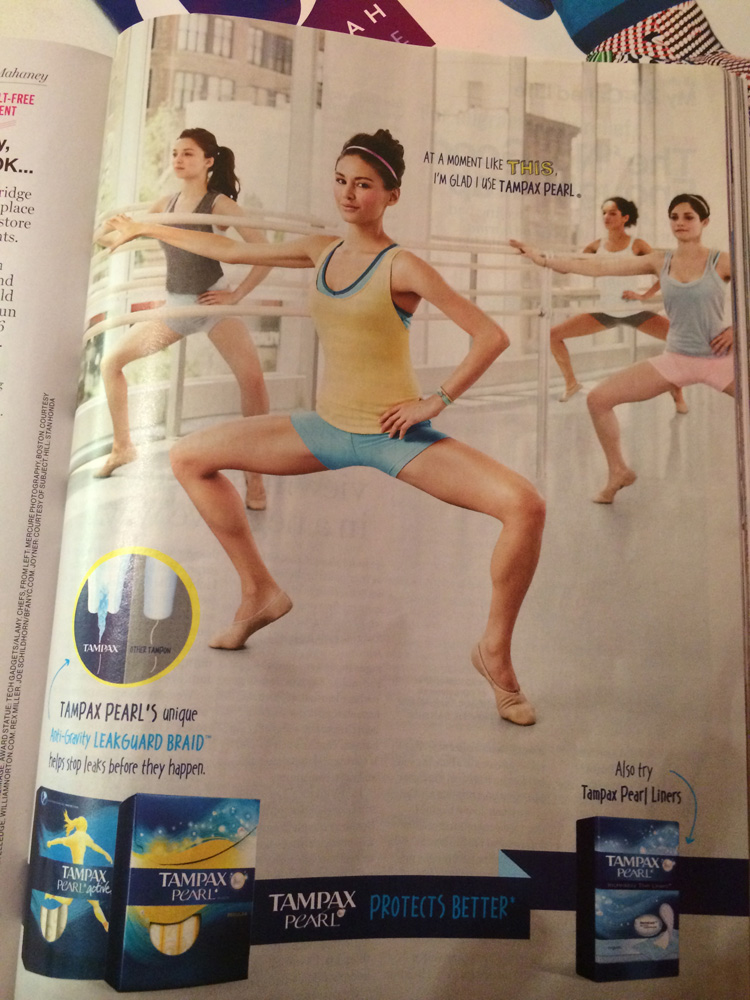 The “dancers” in this advertisement are displaying deplorable technique that would never be seen in a real ballet class. The girls’ feet are not in any position that is recognizable to a dancer. The feet should probably be flat to the floor, but if they are going to be in a demi-point the feet should at least be in full relevé.

If hiring the model in the Free People commercial was the only option for the company they should have least kept her out of pointe shoes. That is where it goes from pathetic to just plain dreadful. Pointe work requires a level of expertise that goes far beyond what this girl’s ankles and body can demonstrate.

All this to say, I too, am offended by this Free People advertisement. I don’t think it was malicious. I think it was produced this way out of ignorance. But that, in and of itself, simply makes me sad. Nobody really understands what we do with our bodies. No one really grasps that we’re not just flitting about.

Here’s a great ad campaign from Under Armour, a company that got it right:

Now there’s me some good dancin’!