A Community on Fire

Did I mention I’m currently a foster parent to some fish? Yep. Three of ‘em. Apparently, they do not have names, so I’ve been affectionately calling them Lester, Lulu, and Little One. 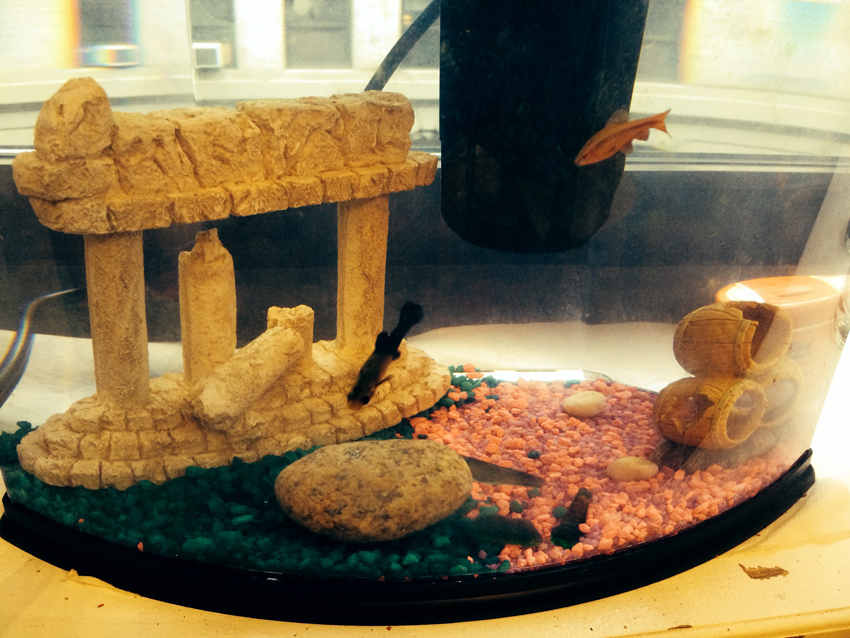 It was such a scary day when it happened. It seems the fire was caused when a fallen candle went unnoticed. It happened during a woman’s 60th birthday party. The couple had rented 4 high tops, covered them in paper tablecloths, and decorated each table with a candle. With the paper tablecloths and the streamers and all of the other decorations, the apartment went up pretty quickly. Many people made it out of the building, but a few of us were still inside when the firefighters came up the stairwells and commanded us to stay put. I trusted them. Surely they knew what they were doing, right? But it was disconcerting to hear all of the commotion and breaking glass without having any idea what was actually going on. At the time, we didn’t even know which apartment was on fire. Turns out the firefighters were breaking glass on purpose to get through the windows, but it was counter intuitive not to run out of the building against firefighter orders when we thought the breaking glass was from explosions.

Bella and her parents weren’t home, so the firefighters had busted through their door. (As a matter of fact, they busted down the door of every apartment in that vertical line.) Those of us on the fourth floor who were home rushed into their apartment and immediately started a bucket brigade in hopes of salvaging as much as possible from the water pouring in from the ceiling. It was crazy. God bless our neighbor, Bruce, who thought to grab the recycle bins from the hallway to use as catchers. We all rushed from our apartments with every towel and every pot we could muster. We got in there in time to save their desktop, their laptop, and a few other valuable and important things.

When Bella and her parents made it home, we had saved as much as possible, but it looked pretty bleak. Bella was crying as she walked down the hallway toward her apartment.

A little girl in tears. So sad. No one really knew how to soothe her.

She went inside with her parents to survey the damage. She came out appearing much calmer as she said, “My American Girl dolls are ok, so I feel better.” We were a bit in shock that that’s what she cared about most of all. We petted her and agreed it was a stroke of luck. She exclaimed with a teenager-style-sigh, “You don’t understand. I can’t replace those.” We all laughed and said indeed.

Leave it to the 11-year-old to put it all in perspective.

The most important good news of all, is that no one was injured in any way that day. Everyone was out safe or in no danger as the firefighters did their duty. But the other wonderful thing that came from that day was the reminder that we all have each other’s back. New York City is brimming with helpful, empathetic, proactive neighbors who will come to your aid whenever you need it most. We are a strong lot. We all hugged each other and gazed at one another with knowing looks. The fierceness of community raged brighter than even that fire.

And hey, I got some fish out of the deal. At least for the time being anyway. 😉