When I was 10 years old, I had the life altering good fortune to see A CHORUS LINE on Broadway. It was playing at the Shubert Theater and it offered a gift of magic that stayed with me from curtain up to curtain down, and beyond. I had been transported by the dancers and their stories; so when the show ended, I pleaded with my parents to let me wait at the stage door in Shubert Alley for the dancers to emerge. I didn’t have lofty goals of meeting them or asking for their autographs, I just wanted to catch a reassuring glimpse that such creatures were real.

So, there we stood outside the theater in Shubert Alley, my eyes transfixed on the stage door. I noticed almost immediately that the door was made of gold. A solid gold door. My heart raced. My mouth went dry. The glamour. The beauty. The importance. The weight. The honor. Of course, now in adulthood, I know that door isn’t made of gold, it’s simply plated in brass. 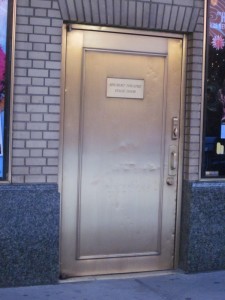 For years on various trips to New York City, as I would pass through Shubert Alley (as one inevitably does, going from theater to theater and restaurant to restaurant in the Broadway theater district) I would pause as I walked past the Shubert Theater and say to myself, “One day, I’m going to walk through that gold stage door”.

It was a mantra deep in the recesses of my mind confirming over and over a truth I would manifest for myself, never knowing how, never controlling the route, just knowing with a deep well of trust. The trust and belief in telling the Universe what you want. Be clear. Don’t be muddy. Be honest. Don’t have agendas. Life will take you on your path.

But don’t mistake what I’m saying. You have to do the work, too. BE READY. I studied dance: class after class after class. I studied voice: private lessons for years. I took acting classes: scene work, improv, technique. I showed up for every audition even if I didn’t think I was right for the part. And all for what? To be able to walk through that gold stage door. In truth, ANY Broadway stage door would do, but yes, the Shubert Theater gold stage door was the representative image I carried with me.

After years of performing in summer stock, regional productions, and on national tours, I finally landed an honest-to-God Broadway show. And BAM! Wasn’t it a kick in the pants to have booked the musical CHICAGO, which just so happened to be reigning at The Shubert Theater! When I arrived for rehearsal, I wasn’t walking through just any Broadway stage door, I was walking through THE Broadway stage door I had been dreaming about for 20 years. 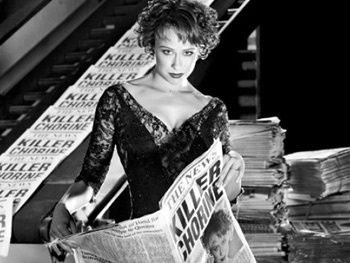 I started rehearsal in a puddle of happy tears and the stage managers thought I might be loony tunes. The dance captains and choreographers comforted me through my tears and hyperventilated breaths in an effort to calm me down. Any kindness in my direction was clearly to get me to stop crying so we could all get to work. I was a mess. But eventually I grabbed control of myself. I focused on the excitement. I focused on my ability which had landed me in this realized dream in the first place. And then I voiced a very, very quiet internal cheer that only I could hear. I did a secret party-for-one primal scream just so I could put an emotional placard on my triumphant Broadway debut and the full-circle moment of it all. The rest of them may have thought I was odd, but I was taking it in. And then, instead of tears, I took in deep breaths of confidence, acceptance, and deserving.

I thought it.
I wished it.
I pictured it.
I worked for it.
I got it.

Powerful stuff that . . . the idea of imagining something so vividly that you manifest it into being.

I sometimes wonder where that powerful young girl went. The little girl that believed all things were in her grasp, no matter how far from home, how crazy to anyone else, or how high, even to the stars. I still believe in everything I just spoke of, but as an adult, somehow the voices of doubt and worry and pragmatism creep into my mind in ways they never did when I was little.

And the real irony is, I waited my whole life to be an adult because I thought everything in my life would be perfect when I grew up. There’s a beautiful song in the Broadway musical MATILDA — which just so happens to be playing at . . . you guessed it . . . behind that gold door at The Shubert Theater – where the children sing about the solace and security they’ll feel when they grow up, the power they’ll attain, the opportunities that will come, and all the confidence and knowledge that are so out of reach when one is little.

If you’ll permit me, here is part of the libretto from MATILDA:

When I grow up,
I will be brave enough to fight the creatures
That you have to fight beneath the bed each night
To be a grown up. 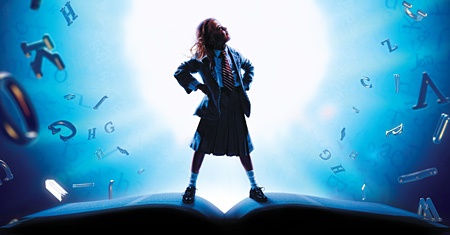 But now, I believe our true power lies in the buried treasure of our resilient childhood spirit. Whenever I feel really strong, it’s usually because I’ve tapped into the power of the little girl buried in my history. I unearth all her daring and let her be my guide. There is another wonderful song in MATILDA where Matilda sings about being strong even when you’re weak, being brave even when you’re scared, and standing up even when you’re being pushed down.

Even if you’re little you can do a lot, you
Mustn’t let a little thing like little stop you,
If you sit around and let them get on top, you
Won’t change a thing.
Just because you find that life’s not fair, it
Doesn’t mean that you just have to grin and bear it.
If you always take it on the chin and wear it
You might as well be saying
You think that it’s ok, and
That’s not right.
And if it’s not right
You have to put it right.

It’s definitely the little girl in me that got me to where I am today. Much of what I pictured when I was young has come to fruition. My life is full of love, friends, family, and a fulfilling career. That 10 year old girl was wise beyond her years. And I will always be indebted to her.

Do you have stories that are similar to mine? Maybe they’re not about Broadway or dance, but they’re about your dreams or goals or things you’ve achieved because you pictured them. Tell me!!! Inspire me!