Are We Going to Be Ok?

I read my husband’s journal. Yep. There it is. It was years ago, but I did it. Perhaps a shocking confession. Perhaps not. I’m quite sure I’m not the only person who’s done such a thing. Come on…you know you have. Maybe not your spouse’s, but maybe your son’s or daughter’s or a sibling back when you were a kid? Well, it’s really neither here nor there if you have.

It is strange to me that I did it ‘cause I’m such a Libra. LOL. What I mean by that is, I’m all about what’s right and wrong. I’m all about fairness. I’m all about justice and honesty. I’m probably the most shocked of anyone that I did it. But I guess when insecurities infest the heart, the irrational compulsions tend to invade as well.

And you know the most ridiculous thing of all? I can’t even remember what on earth I was searching for in those journal entries. What I remember is that I got caught and it was not a pretty sight. I was embarrassed, ashamed, and mostly terrified. A fight ensued. And though I can’t remember what all came out during that fight, I remember that it got really heated. I was scared. I was certain the fight was going to be the end of our relationship. And why wouldn’t it be? I had shattered the trust.

The fight got louder and louder. It built in intensity. I felt the end drawing near. And then it occurred to me, why were we fighting if it was all over anyway? In the middle of the screaming I stopped. Frozen. Quiet. Like a panicked deer. I looked at him and asked, “Are we going to be ok on the other side of this?” And then Patrick did this remarkable thing. He stopped. Frozen. Quiet. But with surprising matter-of-fact resolution said, “Of course.” 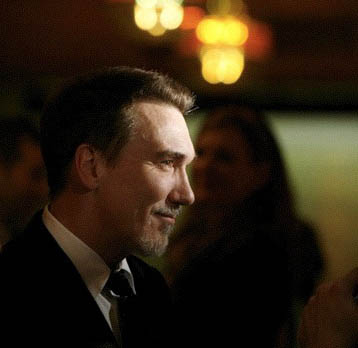 We then instantly resumed the fight.

The difference being I knew the fight was leading to a better understanding of one another. We were able to fight with purpose because we were building a future. On the other side, we would be closer, tighter, and even more committed than before. Any and all insecurities I may have felt before and after I had read his journal vanished in an instant. The unconditional love he granted to me in that moment became the foundation of our relationship moving forward.

When we have rough patches now, we know that “we are going to be ok on the other side.” The important thing is to not bail. Speak up, but never give up.

I am forever grateful for the gift of love that Patrick laid at my feet that day. It filled me with confidence and hope and trust. Weird. I read his journal and somehow gained more trust. Well, I was lucky in that regard. It definitely could’ve gone the other way. But when younger adults ask me what the secret is to maintaining a marriage, I always say the secret is to not leave. Even when things are at their darkest, don’t leave. Even when you want to strangle each other, don’t leave. If love is there, if true love was ever there, you will find your way back to each other.

In honor of my dear, true husband and his adoration of Shakespeare I offer this final thought:

Let me not to the marriage of true minds

Admit impediments. Love is not love

Which alters when it alteration finds,

Or bends with the remover to remove:

O no; it is an ever-fixed mark,

That looks on tempests, and is never shaken;

It is the star to every wandering bark,

Whose worth’s unknown, although his height be taken.

Love’s not Time’s fool, though rosy lips and cheeks

Within his bending sickle’s compass come;

Love alters not with his brief hours and weeks,

But bears it out even to the edge of doom.

If this be error and upon me proved,

I never writ, nor no man ever loved.