And what a year it’s been. 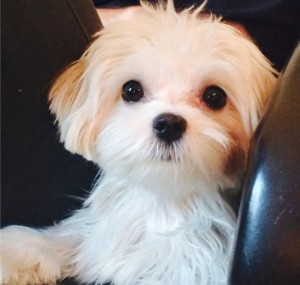 She is a pistol. My, oh my, how different she is from our first dog, Sophie. It’s been a real adjustment for me. I miss Sophie every single day, almost every minute. I think about her constantly, and though it’s been over a year since she died, I still can’t believe she’s gone. I talk to her out loud, imagining her in some doggie heaven, resting peacefully, watching all the other dogs run around while she remains civilized. And I tell Georgie about her sister all the time, too.

Patrick says he thinks we each loved Sophie a little differently. We both loved her quite intensely. We were that couple that treated her more like a human than a dog. But although Patrick loved Sophie very much as our dog, I loved Sophie as though she were my daughter. It rarely occurred to me that she was a dog. In fact, there’s an inside joke that came about when a person at Lion King tattled on Patrick, telling the stage manager that Patrick had a dog in his dressing room. Her priceless response “Sophie is NOT a dog” has become legendary. You can imagine the confused look on the other guy’s face.

It’s bittersweet sharing your life with an animal. There is an inherent contract you sign that says you will eventually have to say goodbye. Obviously, I knew Sophie would pass away before me. God forbid the opposite came true. But as much as I tried to prepare myself, I was not at all prepared when the moment finally came.

I really did not want another dog after Sophie died. There are numerous reasons why, but one of the reasons was I never wanted to feel the pain of losing a dog again. It was a decision to bring her into our lives; but I’ve had my share of frustration, mostly because she’s so different from Sophie. Unlike Sophie, Georgie is a DOG — all dog. She’s expressive and wonderful and funny and sweet, but definitely a dog — an inexhaustible puppy that drives me crazy. I was determined to make Patrick do all the work. I told him, “This is all you. You wanted her. You can deal with her.” 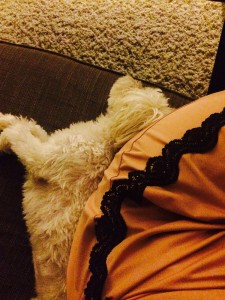 Ha! Like that worked! First of all, I’m a control freak; so I took over anyway. And also, damn it, I fell in love with Georgie despite my protestations. She recently had a really bad incident playing tug of war with her toy and slammed her head into the coffee table. She suffered a really severe concussion and was in critical shape for a few days. My heart broke. It was exactly the type of pain I wanted to avoid. 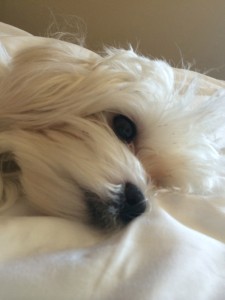 But if we didn’t have her we wouldn’t have all the joy she brings either. You can’t live your life sheltering yourself from pain at the expense of closing yourself off from joy. I know this, but it’s hard. My heart is still with Sophie. I still have her little face as the wallpaper on my phone. But my heart is also opening to Georgie. And ironically she’s a total Mommy’s girl. She’s always hugging on me, cuddling on me, and kissing on me. 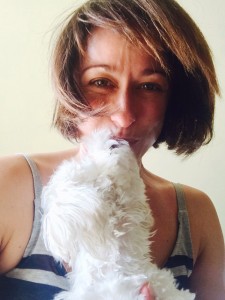 She greets me first when we come home. It’s tragic and hilarious because it’s Patrick who was so excited to bring another dog into our lives. Patrick always jokes in her voice, “I only love my mommy.” 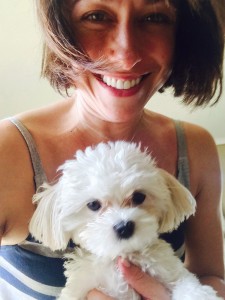