Patrick and I are often asked how we make our marriage work. We’ve been together almost 20 years, which isn’t necessarily so incredibly long, but in this business we call Show it can be more unusual to have a relationship last this long. The questions and pleas for advice tend to come from younger people just starting out who are concerned that balancing this particular career with a relationship can be too difficult. They fear they won’t be able to have both. Patrick and I are an example of a marriage with two performers that is working.

There are many obstacles married couples face that mirror the same problems we face in the entertainment industry – distance, separation, jealousy as one partner moves forward in their career, juggling weird hours and home and kids. Truly, the advice is the same regardless of what each spouse does for a living.

I was talking to a newlywed earlier today. In the spirit of Valentine’s Day, we were talking about what makes a marriage work. It was touching to hear her idealistic views and sweet, positive notions about it all. It actually took me back to when I thought love would solve all problems. And love is paramount, it’s first and foremost, but commitment is what actually makes a marriage last. Never giving up.

This young, sweet newlywed and I started talking about all the little day to day things that can keep a marriage strong. These are some of the things we touched upon…

Don’t bicker in front of others. It is uncomfortable when couples belittle one another in mixed company. Sometimes I catch myself doing that. It isn’t pretty. And in that same vein, be overly conscientious and cautious about bringing up buried grievances in a group. It can be tempting to chime into a conversation with an example of how your spouse has injured you in some way or how you disagree about a topic. I have done this. I think sometimes I feel safer knowing there’s someone else in the room that might be on my side or agree with my position. Safety in numbers, I suppose. But pointing out your partner’s “faults” or “misdemeanors” in front of others only makes you look bad. It breeds resentment. I regret it every time I hear myself doing it. I have had to apologize to Patrick a few times for this. It’s very difficult to win back trust after that happens. It’s so much better to develop trust by never doing it in the first place.

Communication is so important. You owe it to yourself, your partner, and your relationship to bring up your concerns in private and definitely before they get so inflated they explode in front of others. Aaaah, if only it was that easy. It’s all easier said than done, isn’t it? I have mentioned in other blog entries that marriage is hard. It really is. I swear, it’s these little everyday things that are the hardest. Finding the right time to communicate can often be as tricky as the finding the words themselves, can’t it?

But when things seem insurmountable, when you are really frustrated with your partner, another great piece of advice is to assume the best in the other. So, for instance, when one of you is running late, assume the best in the other. What reason could they be late, other than they are disrespecting you? If your spouse is taking you for granted or ignoring you, imagine the best reason why. Perhaps they’re really tired or overwhelmed with other stresses, perhaps they’re taking you for granted because they just got too comfortable. That’s ok. It’s actually a compliment that they feel so relaxed with you. Communicate your needs to your partner. Give them the chance to make it better. Don’t just fume, assuming they don’t care. Above all, trust that they will come through. None of us are perfect. We all slip. We all injure our partner at some time or another. It’s human. It’s life.

This may be a silly story, maybe it’s not even the best example, but it’s coming to mind (I hope my dad isn’t too embarrassed by this. I share it with the sincerest respect and love)… 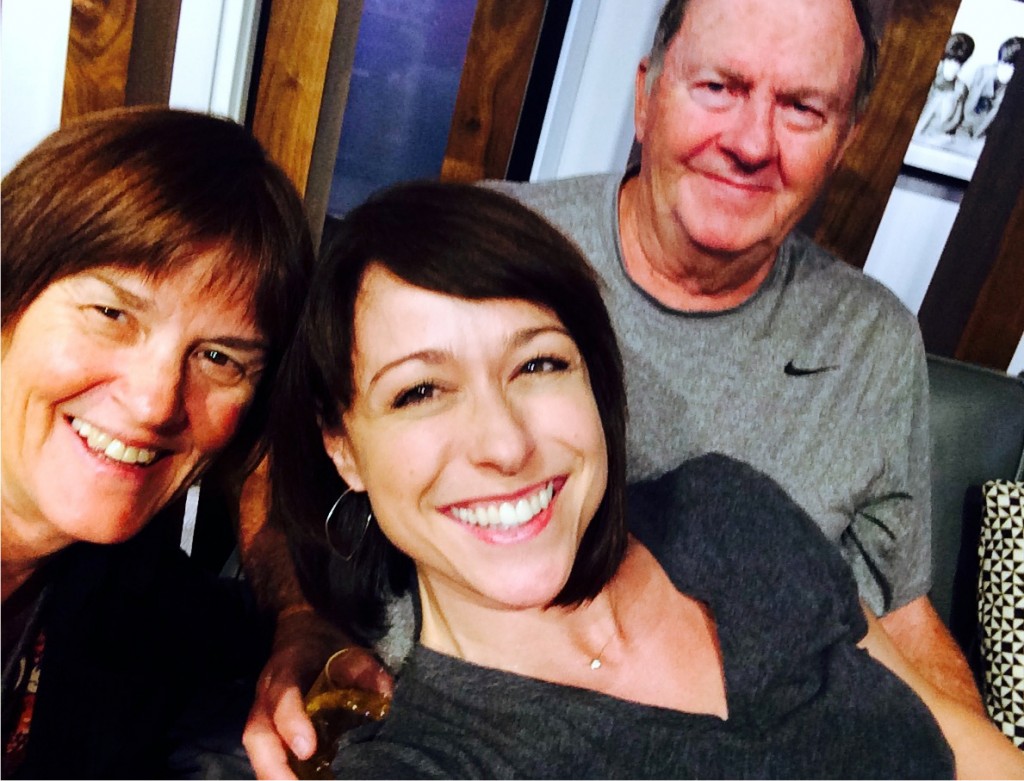 Me with my Dad and Stepmom

Every year, along with my sister and her husband and sometimes a few friends, we spend New Years Eve with my dad and stepmom. It’s also the night we exchange our holiday gifts. A couple years ago my dad had one too many, so to speak. We were celebrating and all having so much fun. Next thing we knew my dad had fallen and hurt his head. It was actually a little bit scary. It was sobering to say the least. My stepmom could have gotten very angry, perhaps yelled at him for ruining New Years — which he didn’t do at all, we all understood, and once we knew he was ok, we laughed it off, but you know what I mean – she could have blamed him, been mad at him, or worse, held it against him, as if he decided ahead of time to make it all happen. Not only did she care for his injured forehead that night, but in the morning, I climbed the stairs to witness her giving my dad a sweet play by play of the previous evening. Not surprisingly, he couldn’t remember much of what had transpired the night before, so she was showing him all his presents again and telling him all the funny and sentimental things that had been said. It was too, too cute. I know a lot of households would have been icy and shut down following an evening like that. But she trusted that he meant no harm. She assumed the best in him. He was just having fun and enjoying the heck out of his family surrounding him. He got carried away, yes. But she didn’t make him pay for it anymore than he already had.

Valentine’s Day is coming. And I know, I know, it’s a made up holiday created to force us into spending money. And I am aware, similar to during the December holidays, that it can be painful, even nauseating, to witness the love bubble of others celebrating the holiday if you’re wishing you had a special valentine of your own.

But if you’re into it, let Valentine’s Day be a springboard to show your appreciation to your partner this Saturday and then every day all year long. I’m fortunate to see my parents — all four of them — making it work. My mom and stepdad really support each other too. They’ve been through so much together, many obstacles, but they still have each other’s back.

I feel the same way about Patrick. He’s my Valentine, now and forever.

Tell me your great advice for long lasting relationships and give me some examples of when you’ve seen couples get it right. XOX