As many of you know, I’m back on the boards in CHICAGO on Broadway. Playing Roxie Hart is a dream role and definitely a dream come true on so many levels. This show has meant the world to me since I first joined the ensemble back in 1998. Because the show has been on Broadway and enjoyed the success of many touring companies over the last 18 years, the building’s walls have seen and heard many dancers and performers and crew come and go and come again. We all joke at CHICAGO that it’s never goodbye, it’s a revolving door, always ‘til the next time.

But some goodbyes tug at our heartstrings a bit. Last night at intermission we sang Happy Trails to Jeremy Daniels, the national press representative for CHICAGO for the past 8 years. He’s an absolute doll, a brilliant photographer, and a lover of all things theater. I managed to snap a picture of the cake. 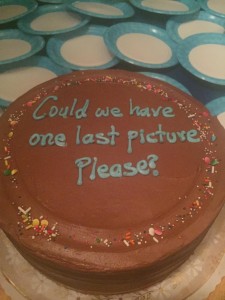 This is an actual line in the show.
Pretty clever quote given Jeremy’s job title, huh?

But I was remiss in videoing his speech, which as he spoke I realized was bringing me to tears. But if you’ll permit me I will paraphrase . . . He said, “In 1997 I was sitting in front of the TV with friends watching the Tony Awards for the first time. I was loving every minute, but then a show called CHICAGO came on. I saw Ann and Bebe perform Nowadays and Hot Honey Rag and I thought, ‘I don’t know what that is, but I have to be a part of it someday.’ And here I am, having just had the honor of being a part of CHICAGO for the past 8 years. I am so grateful.”

He was of course referring to the incomparable Ann Reinking and Bebe Neuwirth who originated the roles of Roxie Hart and Velma Kelly in the 1997 revival that is still running today and garnered the show and each of them Tony Awards that same night.

Jeremy’s words made me reflect on my own journey picturing myself working on Broadway, even in CHICAGO, and how visualizing it so vividly made it come to pass. I wrote about it before. I’ll tag the original blog post onto the end of this one. If you haven’t read it before – my gold stage door story – do. It’s a goody!

But today I’m just thinking about Jeremy and how fleeting the different phases of our lives can be. It makes me reflect even more on the glorious lyrics that close CHICAGO the musical –

In fifty years or so
It’s gonna change, you know
But oh, it’s heaven
Nowadays

At the end of the show Roxie and Velma throw roses out into the audience. Knowing Jeremy was watching the show that evening, I threw one in his direction. He caught it! Big hug and kiss, Jeremy.

Here’s the blog post I mentioned above, entitled, The Gold Stage Door.