Can We All Get Along?

“Can we all get along”, asked Rodney King at a press conference following the 1992 riots that sprung up in Los Angeles following the acquittal of four police officers on trial for excessively beating him after a high speed chase. I lived in Los Angeles at the time and was extremely close to the fray. Most buildings around our apartment were on fire and the smoke was so black it created an opaque wall outside our windows. We were in definitive danger and I was very scared. I was also very sad.

Rodney King is no scholar. (He is also no saint, btw.) He got a lot of flack for those simple words at the press conference pleading for people to stop the violence triggered by the verdicts. Rather than referring to his words as having simplicity, pundits and editors referred to his personhood as a simpleton — as if to say it was a ridiculous notion to solve the world’s ills with a playground motto as base as “Can we all get along?”

But I wonder what’s so ridiculous about that. Isn’t there a thing-a-ma-jig out there stating, “All I Needed to Learn I Learned In Kindergarten”? Yep! Found it! Here it is. 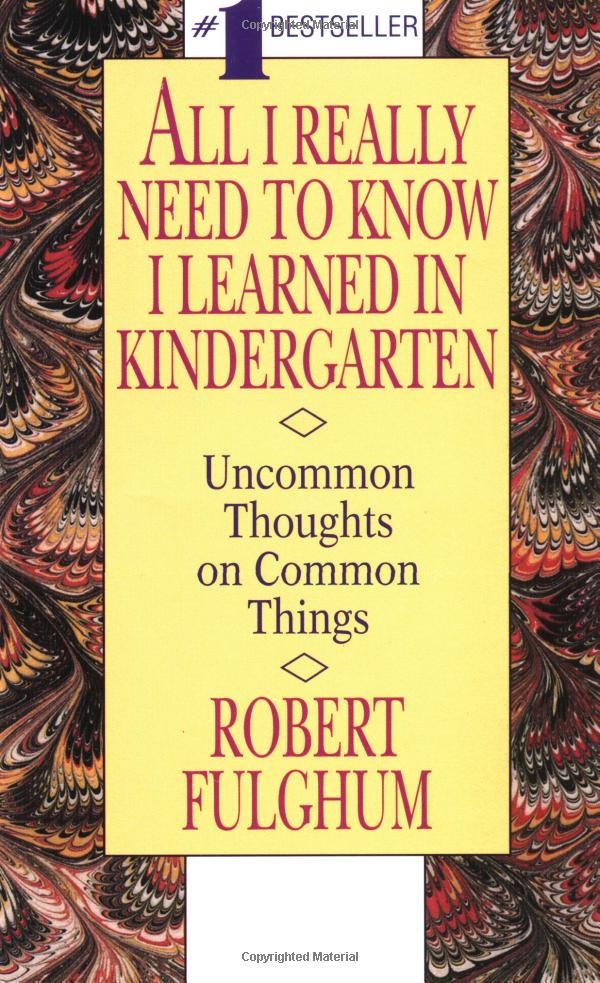 “Everything I Need To Know I Learned In Kindergarten”

When I’m out and about in New York City, moving through my day, the continual onslaught of rude and annoying behavior committed by any number of varied people doesn’t usually get to me. Not to say I don’t register the elbows jabbing me in the chest, or the wall of bodies that crash into me like a wave as I try to exit a subway train while others refuse to let me off before they begin rushing on, or the unrelenting honking of horns from cars stuck in traffic (as if incessant honking will have any effect on ending the gridlock). I do notice these annoyances. But I don’t hold onto them. I let them roll off my back. It’s a huge city after all. Chances are, interaction will be irritating.

But yesterday on my way home I was in a very crowded subway car, trying to hold on, trying to breathe, and trying to read — which I probably shouldn’t have been doing because even my book was taking up precious space – when all of a sudden this guy pulls out a speaker, holds it above his head and starts beat boxing to a drum rhythm.

I don’t know why, I think it was the recent church shooting in South Carolina that has me really upset and rattled, but this action just worked my nerves so deeply. I wanted to shout, “Hey, you’re not the only one on this train, buddy! Take it down a notch. I’m trying to read. That woman is trying to keep her baby asleep. Can’t you see that guy next to you has a stress headache? Come on! You are not alone on this train. We are all in this together. Geez!”

And the words that kept playing over and over in my mind were, “Can we all just get along?” I mean, seriously. We all have dreams, loves, families, heartache, and pain. When will we all understand that we are so much more alike than we are different? When will people stop assuming their way is the only way? Why does anyone believe they are superior, have the only path, hold steadfast to ideas that kill and separate us. When will I be able to stop asking these questions? When?!

We are all on this planet together. Our actions affect those around us in little ways and in monstrous ways. To quote Robert Fulghum referring to what he learned in kindergarten, “This is still true, no matter how old you are – when you go out into the world, it is best to hold hands.”