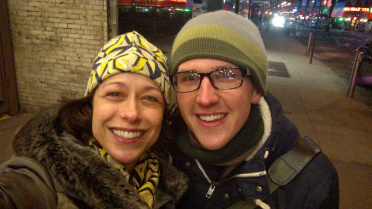 I was recently greeted at the stage door by a young man named Christopher following a performance of CHICAGO. He was eager to tell me he was a huge fan and to share with me his passions and excitement around acting, philanthropic efforts, and his new blog about unexpected Smile Stories. It’s a gratitude list of sorts, cataloguing and acknowledging surprise moments that bring on unexpected smiles that brighten his day. He invited me to share my own Smile Story as a guest writer on his blog.

Starring as Roxie Hart on Broadway is in and of itself a reason for me to smile all day. I am beyond delighted every time I get the call to go back into the show. Ah, CHICAGO! Running for nearly 20 years now, it is the gift that keeps on giving, allowing actors to come and go, almost through a proverbial revolving door. It does make me smile. But ironically, the evening I met Christopher happened to be a day I was having a hard time finding my smile. I’d been battling a few inner demons, dealing with an aging body, a loss of enthusiasm, a dimming of hope, wondering what would be next when the CHICAGO contract comes to an end this time. But when he asked me to participate on his blog, I suddenly realized I already had a wonderful example of a Smile Story. I just hadn’t processed it yet.

In the audience that night was an adorable young girl in the front row. She looked no older than 10. It’s very difficult to see members of the audience because of the blinding effect of the spotlight, but I can usually make out the front row. She stood out to me because we don’t often see young audience goers at CHICAGO. I mean, the first spoken words of the show are “You are about to see a story of murder, greed, corruption, violence, exploitation, adultery, and treachery.” Not your typical elementary school fare. LOL. The show is harmless enough; I don’t think it’s inappropriate for kids, per say. I’m just saying it isn’t the typical family night out, so I noticed her.

She was gleeful watching the show. I assumed she was probably a budding performer herself. And though I didn’t begin dancing until I was 13, I had an immediate affinity and connection to her. I saw my younger self in her eyes and her smile. I directed some of Roxie’s mid show monologue directly to her and managed to throw a wink in her direction during the Hot Honey Rag at the finale of the show.

Earlier that week I’d been reminded of my younger self when I watched a young woman doing a combination in dance class. Ironically, the song we were dancing to in class was “Cell Block Tango!” When I first joined the company of CHICAGO, 18 years ago, I was in the ensemble and did Cell Block Tango every night. Though this teacher had put his own spin on the choreography, which was much more hip hop and commercial than I’m used to, so I was having a devil of a time picking up the steps and keeping up. I felt lost, old, and well, kind of like a wannabe. I kept picturing my younger self performing that very song. I was wondering where that girl went. And watching this other gal in class was more bittersweet than seeing the young girl in the front row. The girl in class was vibrant and gutsy and committed. She didn’t just do the movement correctly, she was “living,” as we say. Sure, it was only class, but she wasn’t taking for granted any chance to dance. She would have danced the same had she been on a Broadway stage doing the same combination. She saw class as a training ground for technique AND performance skills. That was always me. It’s still me to some extent, but watching her take those huge bites out of the NYC apple made me long for the hunger of my youth. Honestly, nowadays my body hurts too much to move fast enough to accomplish many of the things my vision and imagination are striving toward.

Anyway, all this to say, I was in a funk. When I initially saw the little girl in the front row, I pegged her as another example of my fleeting youth. But when Christopher suggested the guest blog I realized that the little girl in the audience had actually made me really happy. I genuinely smiled when I saw her adorable face. She brightened my day in the most unexpected way. And it did indeed cheer me up and recharge my spirit. I owe Christopher a lot for proposing the question that allowed me to notice and log that joy. It just goes to prove the chain effect of positive thought. Even my initial discussion with Christopher provided its own unexpected Smile Story. Who knew I’d walk out of the stage door that evening to a young man showering me with compliments and adoration? I owe that little girl in the front row a lot. Wherever she is, I hope she remembers the smile I gave her from the stage. If I know her like I know my own younger self, I bet she’ll remember it always.

Tell me about any unexpected Smile Stories you have had. And if you think you haven’t had any, begin looking for them now. They’re there. I promise.