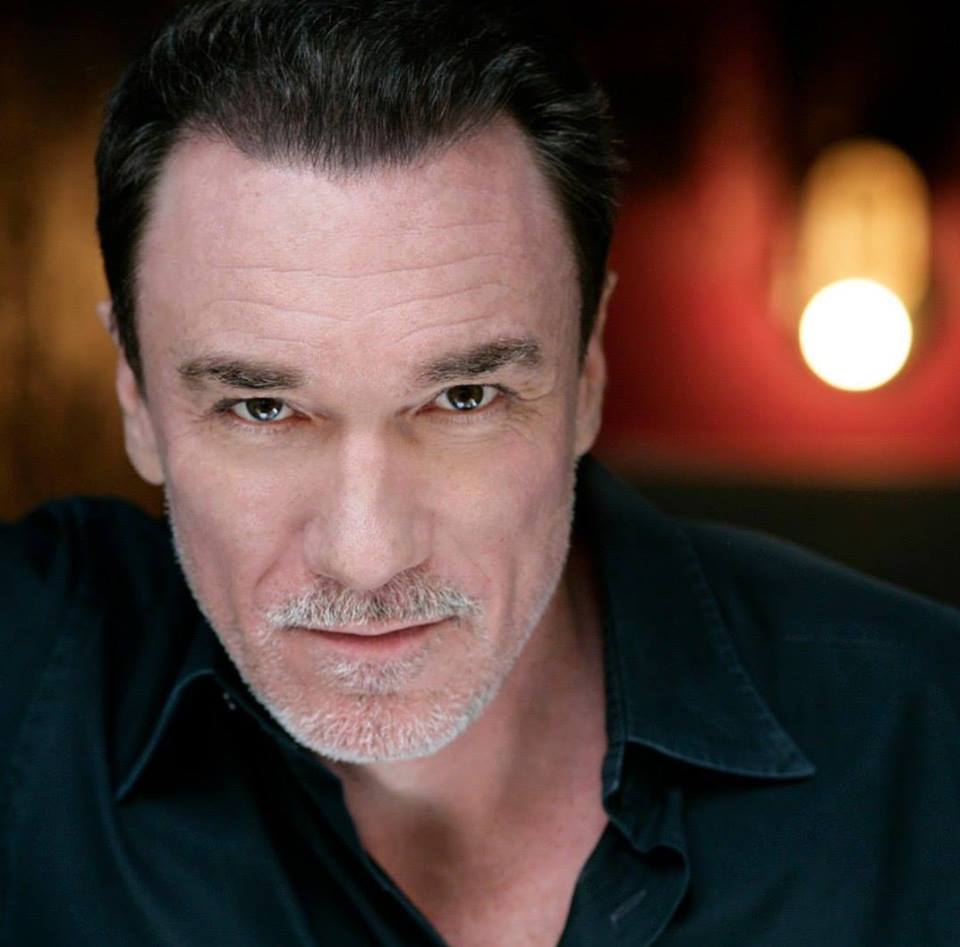 My husband had his 54th birthday this week, but I ended up with a gift too, in the form of a life lesson.

I had been having a tricky time figuring out what to get Patrick for his birthday. My friend Stuart sparked an idea to celebrate Patrick’s 54th at 54 Below, a renovated cabaret space in the basement of the old Studio 54. Clever. It’s one of our favorite spots. Patrick and I have both performed there. He even did his one-man villain show there twice. Plus, we have lots of fond memories of seeing our friends and idols perform there.

But in my heart I didn’t think going to 54 Below would be what he’d want to do on his birthday. I mean, he wouldn’t want to go just ’cause of the 54 at 54 idea. My instinct was telling me I’d still need to come up with a different gift. However, at Stuart’s suggestion, mostly just for shits and giggles, I checked the website to see who, if anyone, would be performing on Patrick’s birthday. To my great surprise and utter glee I saw it would be The Skivvies. Jackpot!!! We both love The Skivies. Lauren Molina and Nick Cearley are uber talented, creative, fun musicians whose schtick is writing amazing mashups. Their gimmick is that they perform in their underwear — down to their skivies, if you will. You might remember when Patrick and I were guest performers during one of their shows at 54 Below. 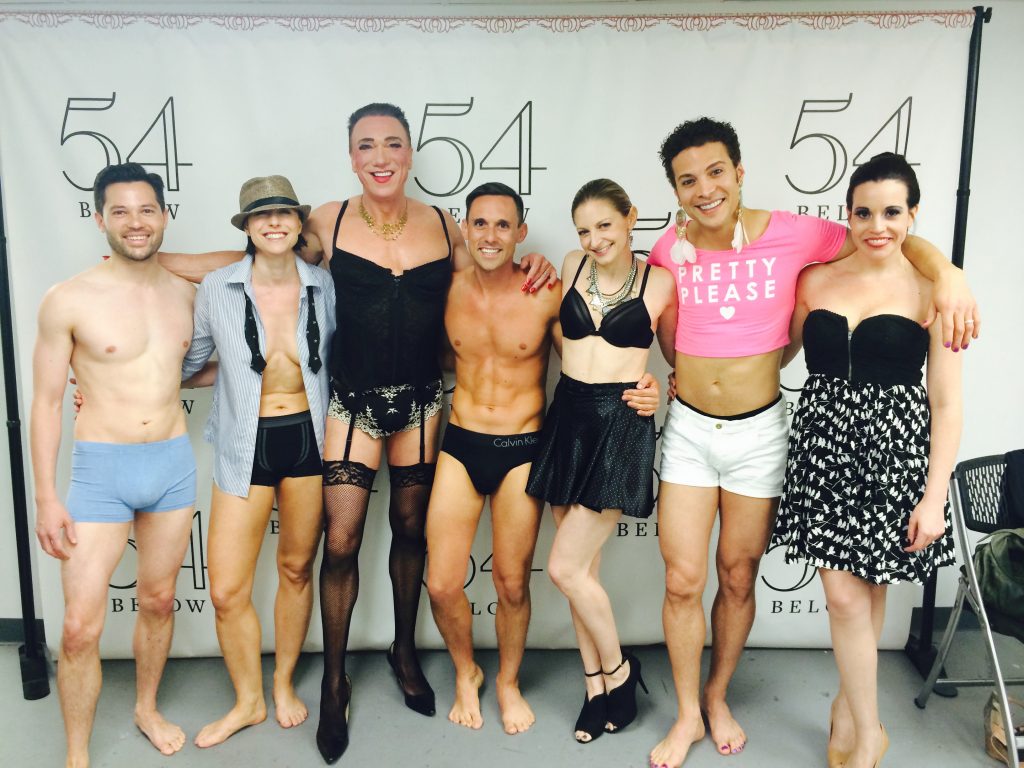 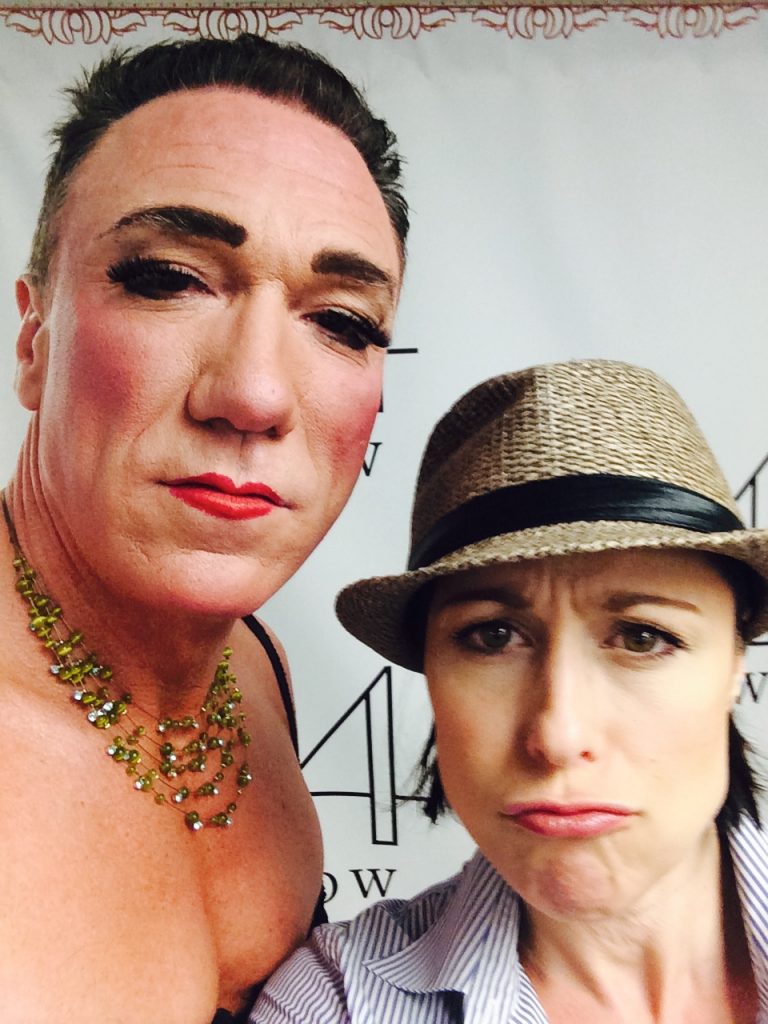 A grandiose plan was born . . . What if Lauren and Nick were willing to write a customized mashup for Patrick?!! Now THAT would be a cool gift!

I wrote to Lauren and asked if they were willing to do it. They were!!! I was elated. I set to inviting friends and family to join us for the evening. My parents would be coincidentally visiting already, so that meant they could come. And my sister and brother-in-law said they’d drive the two and half hours from Doylestown to be here. Sixteen peeps all tolled. Crazy right? Suddenly a casual, run-of-the-mill birthday with no tangible gift to wrap was turning into a surprise party he’d never forget. I was ecstatic.

Lauren forwarded me a recording of the song when it was finished. I was so excited to listen to it. I almost didn’t though because I really wanted it to be a surprise for me too. But I did listen and I’m so glad I did. It was really cute. It was fun and funny and witty. But my heart sank just a little because I had something else really grand in mind — some fantasy-level song, so astonishing that, looking back on it now, there was no way Nick and Lauren could have succeeded in delivering.

I really, really wanted them to do more, add more, make it more. But I was wrestling with lots of pesky inner monologue quandaries. How could I ask them to go so far above and beyond after they so graciously gave of their talents already? Why was I such an ungrateful hag to not be satisfied with what they’d so generously offered? What if I pushed the limit and then they thought I was a nightmare? I mean, come on, it’s The Skivvies!!! They’re really cool. I want them to like me, not hate me.

I mulled it over. What to do? The last thing I wanted to do was offend them. I WAS grateful for the song they wrote. Should I just pull myself together and enjoy the ride? Or should I step up and ask for what I really want? This may not seem like a big deal to some of you, but to me, building up the courage to approach them again seemed risky and rude. What nerve. (That’s a double entendre, by the way.)

What settled me was deciding to follow the ol’ “it never hurts to ask” idiom. I just came clean and was honest. I let them know that though it wasn’t even remotely their responsibility, I was essentially counting on the song to be Patrick’s actual present. Tickets and food and bar tab for 16 friends and family would run me a pretty penny, but all worth it for a special and unique memory. I expressed my gratitude for the time and effort they’d already put in. And I definitely let them know we were still stoked to spend the evening at the show. It was gonna be great no matter what. But would they consider going back to the drawing board and adding more to the diddy.

After all the fretting about whether I’d be overstepping, Lauren and Nick responded with a heartfelt and exuberant yes. I sent them gobs of info and inside jokes that could help them make the song as personal as possible. The result . . . EPIC.

The lesson came from trusting that I can ask for what I really want. People sense and understand sincerity. But an even bigger lesson came from trusting that other people can take care of themselves. It was not up to me to decide for Lauren and Nick what they’d be willing to do or what they’d want to do. And it’s my understanding that they had a blast writing the mashup. It allowed them to flex their creative muscles even more . They had fun doing it. Asking them to stretch themselves further gave them the opportunity to share even more of their talents with us and the audience, their fans. The crowd went wild!

I was touched. I was over-the-moon. And I was insanely impressed that The Skivies delivered such a one-of-a-kind, exclusive humdinger in such a short time frame. They captured all the wonderful things that make my husband so marvelous. They wrote a song fit for a king, and Patrick has played many, so it’s an apt metaphor. I bow to them.

P.S.- In case you haven’t seen footage from when Patrick and I guested at The Skivvies, here is the video! Proceed with caution. Hahahahahaha!